« An Open Letter to Jason Byassee - Revised | Main | Proportional Representation: The Good, The Bad, The Ugly »

United But NOT Uniform 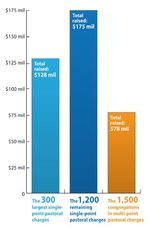 I wonder if we have the capacity to imagine different ways of being church for each grouping? And to provide different resources and supports for each of them?

Whatever else can be made of this data, it is certainly clear that there is no such thing as a “typical” United Church congregation. Whenever we talk about congregations, we need to be very clear just what sort of congregation we are imagining.

This "Reality Check" column first appeared in the March 2014 issue of the United Church Observer,
http://www.ucobserver.org/opinion/2014/03/reality_check.