United Church But No Longer "of" Canada

The following charts compare selected data for the United Church of Canada compared with similar data for Canada’s population as a whole.

The comparison shows how Canadians as a whole are participating in the United Church of Canada, and suggests possible changes in Canadian culture as a whole.

Rates of participation by Canadians in the United Church of Canada as shown by Membership, Baptisms, Weddings, and Funerals have all shown steady decline since at least the mid-1960’s with the exception of a temporary increase from 1980-1990 as the Baby Boom Generation returned with their children.
These trends have been noted for all churches (including evangelical ones) throughout North America. Secular volunteer agencies also report similar declines.

The charts indicate that the religious rituals of weddings, baptisms, and funerals are in decline as an increasingly secular and “spiritual, but not religious” culture no longer looks to organized religion for these life-changing transitions.

Clearly the United Church is not “of” Canada. Perhaps it is time for a change of name.

As I have noted elsewhere, we may be united but we are definitely not uniform (United But Not Uniform). In fact, the differences between the 10% of the largest urban churches, the 50% of rural multi-point Pastoral Charges, and the 40% of remaining single-point Pastoral Charges is so great that I wonder if we shouldn’t call ourselves the Church of the Holy Trinity.

Click here for an easy to print and email Adobe PDF version of this post. The PDF file contains additional information about each of the charts below. 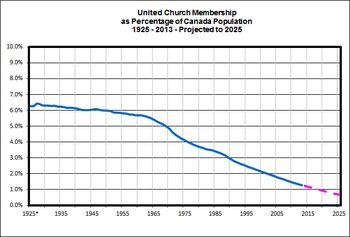 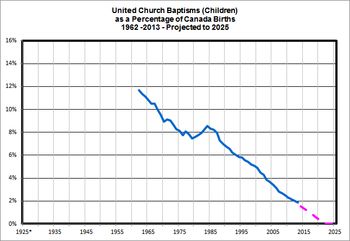 It is Easter Sunday. For context, I am an Episcopalian in Ohio, USA. I am a new reader of your website, and am surprised that it looks as if no one else has commented on your lead. One would think that at least some leaders in an organized denomination would write. Scripture indicate that God’s covenants have unraveled before. Reading those accounts, one concludes it was not very pleasant then either.