United Church of Canada Membership peaked in 1965 after seeing a dramatic rise following the end of the Second World War in 1945. 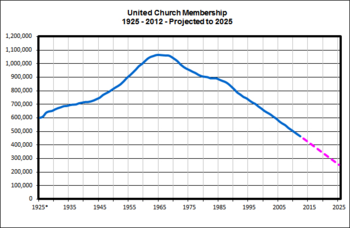 In Canada, the period following 1945 was characterized by three “Booms:” A Marriage Boom; a Baby Boom; and an Urban Boom. Following a decade of economic depression in the 1930’s and six years of war, Canadians migrated from the rural areas where they had grown up into the cities; they got jobs; got married; settled down; and had babies. 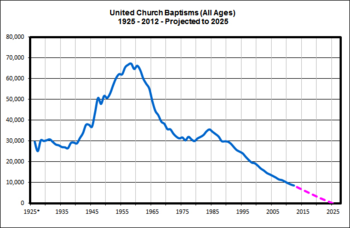 In order for children to baptized, one or both of the parents must be full members of the congregation. And so for a variety reasons: desire to have one’s child baptized, desire to join a community after moving to a new place, or even genuine religious experience, Professions of Faith1  also rose rapidly during this period. 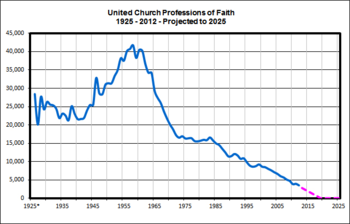 Notice how similar the chart for Professions of Faith looks like the chart for Baptisms. And notice that both peaked in 1958, not 1965. 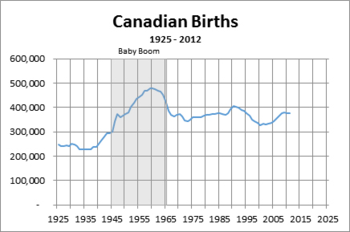 What happened in 1958? The Baby Boom reached its peak. And the first of the Boomers turned 12 and were graduating from Grade 6. So potentially two factors came into play. The first is that parents were no longer Professing their Faith as part of having their first child baptized. The second is that as the first of the Baby Boom generation became teenagers, they began to leave Sunday School and other church programs. Not all of them of course. But then as now, when children stop participating in church activities, the parents almost always also stop.

To understand this it is important to remember that when someone joins the church they remain a member for life. So membership only declines if people die or quit in greater numbers than people become new members. And so, even though Professions of Faith peaked in 1958, the total number of Members should still grow – even at a slower pace – unless Members have also been leaving.

In the United Church, Membership changes in two ways:
1)   Added by:
a)  Profession of Faith (Become a member of a church for the first time.)
b)  Received by Transfer In (Membership is transferred from another church.)
2)   Removed by:
a)  Death
b)  Removed by Transfer Out (Membership is transferred to another church. This category also includes Members who are simply removed from the Membership Roll by action of the church governing body.)

There is no process for confirming that a person who requests a transfer to be removed from one congregation actually does join a new congregation. And as the chart below shows, there are always more Members being Removed than being Received.

As can be seen from the above chart, the net loss of Members usually hovers around 10,000 per year.

The period from 1963 to 1979 saw these losses approach 30,000 a few times. David K. Shearman in a post on WonderCafe2 has wondered if this wasn’t the result of a policy passed by the 1962 General Council that allowed Sessions to remove Members who had been inactive for three or more years. Apart from wishing to clean up its Membership Roll by removing those who were no longer active, congregations were motivated to remove inactive Members because many Presbyteries raised money for their budgets by a per Member assessment. If this explanation is correct, what is happening here is not a loss of currently active Members. Rather it is correcting official records to show historic realities: these Members left some time ago – perhaps in the years around 1958? However, if this were the case, one might expect that the number of Non-Resident Members3 would be reduced as these are people who have already been designated as inactive. As the chart below shows, the number of Non-Resident Members actually grew during this period. So perhaps the decline starting in 1965 was not just “cleaning up the Membership Rolls,” but an actual loss of people who had been active in their congregations?4 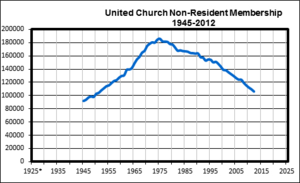 There is another dip for 1988 to 1993 in the chart, “United Church Net Membership Changes by Received and Removed 1945 - 2012.” Might this be a result of the 1988 General Council that agreed that sexual orientation would not be a bar to ordination?

It is a bit messy to show in one chart, but if we show the results of new Members added by Professions of Faith and those lost by Deaths and Transfers, this is what it looks like: 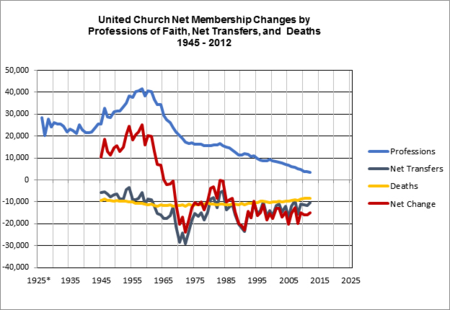 Members removed by death remains fairly constant at about 10,000 per year. And from 1945 to the early 1960’s, the difference between Transfers Out and Transfers In hovered above -10,000. But this combined loss of 20,000 Members was more than made up by Professions of Faith, and so total Membership continued to increase. But from 1965 onward, the number of people leaving the church has not been made up by new Professions of faith, and so the total number of Members has declined – fluctuating between -10,000 to -20,000 per year since 1990.

Well actually the change started in 1958.

Not only did parents no longer join the church for the first time in the same numbers, they began to leave in greater numbers as their children graduated from Grade 6. And as Baby Boomers came of age they did not join the church – did not make Professions of Faith – in sufficient numbers to off-set the number leaving. It took seven years for the impact to be seen in the Total number of Members, but the turning in 1958 was swift and significant.

Baby Boomers were notorious for being anti-institutions in their 20’s. We can see a change in how Canadians participate in religious practices by charting United Church baptisms, marriages and funerals as a percentage of the total number of Canadians born, married, and deceased.

Now it could be that the declines in the charts are only that Canadians were going to other church for these services. But I suspect that in fact, these declines reflect an overall shift in Canadian society:

People have stopped going to church like they (briefly) used to. 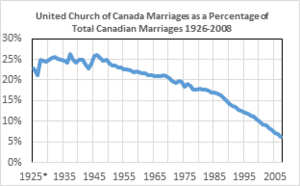 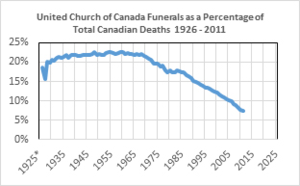 Whatever happened in 1965 had its roots back in 1958 and longer. Because one thing is clear, the boom from 1945 to 1958 did not result in people making a solid, life-changing, life-long experience of participating in a community of faith. The connection between personal spirituality and collective religious practices was not made.

Why was the connection not made? Not because of a failure on the part of congregations.

Just as the boom from 1945 to 1958 was largely a phenomenon of the wider culture in which church participation served broader social ends, so too the “decline” from 1958 onwards was simply a reflection of the place of the church in the existing culture. And that place was, by and large, secondary to other concerns.

Permission is granted for non-profit use of these materials provided the source is acknowledged as, "David Ewart, www.davidewart.ca."

1. People join the church for the first time by making a public profession of their faith during worship.

2. “An Explanation of Church Membership Decline,” http://www.wondercafe.ca/blogs/dks/explanation-church-membership-decline. In his article Shearman refers to Dr. Phyllis Airhart’s book, “A Church with the Soul of a Nation: Making and Remaking the United Church of Canada.” Shearman’s article is what prompted my own look back at 1965.

3. “Non-Resident Members” is a designation congregation’s use to refer to Members who are no longer active, but who have not requested to be Transferred or Removed from the Membership Roll of the congregation.