It's Not Your Fault

American author and social critic James Howard Kunstler coined the phrase “long emergency” to describe the effect of decades of small changes. For example, if your congregation were to lose half its members in one year, that would be an emergency. But if it were to halve its membership over two decades, losing maybe three of four per year, you would adjust and carry on. But, says Kunstler, it’s still an emergency – a long emergency. 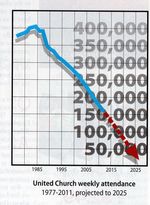 The simple fact is that Canadians are not going to church like they used to. In fact, Canadians aren’t going to synagogues, mosques, temples, or Kiwanis either. Volunteer membership organizations of all types are declining.

Attendance decline is not a problem that can be fixed. It is simply a reality to which we must respond. Congregations must plan to be fewer, smaller and without buildings or payrolls. The challenge is too big for individual congregations to meet on their own; we will need to close, merge, and work together in new ways.

The good news is that the United Church was founded by those who left the beloved familiar behind and embraced the desired unknown. Where that heart still beats, our hope for the future can be found.

Click here for an easy to print or email Adobe PDF version of this post, "It's Not Your Fault."

Appeared in the January, 2014 issue of The United Church Observer, www.ucobserver.org.

The Room Has Left the Building

Click here for an easy to print or email Adobe PDF version of this post, "The Room Has Left the Building." Prepared for Christianity 21 Conference, Denver, CO, January, 2014.

Hi. My name is David Ewart.
I was 3 years old in 1948.
And in the next 7 minutes I want to show you that when I am 103, Protestant denominations in North America will be radically restructured, or non-existent.

Unfortunately, I have learned the hard way that
If you don’t ask the right questions, you end up trying to solve the wrong problems.
And every congregation I’ve met always asks me: What can we do to get more young families to come to church?

I have shelves full of books and have attended countless conferences and workshops to answer that question.
But all of these books, workshops, and conferences have focused on the church in splendid isolation. They all had great ideas. But.

But what I didn’t notice was that none of these ever seriously discussed the reality that congregations do not exist in isolation.
Congregations function within a larger society with its own culture and values.
And its own competing salvation stories.

No congregation can survive from one generation to the next by having babies. It just can’t have babies fast enough to regenerate itself that way.
Congregations must depend on society having babies who will go to church.

But here’s the catch.
What if the society is producing babies who don’t go to church like they used to?
Because if that is true, then this is a problem that no congregation can fix. Respond to, Yes. But fix? No.

I think there are four or five changes in society that are having an enormous impact on Protestant denominations.
Changes that help us understand why society’s babies are not going to church as much as they used to.
I want to talk about two of them.

When was the last time you had to be in the same room at the same time as the musicians to hear the music?
…
In the late 1800’s.

Now for the next hundred years, you still had to be in the same room as your stereo.
But starting in the 1980’s you could unplug your music from the wall.
Amazing. Music without musicians and without a room.

And about 10 years ago, when you stepped out of the room, you were no longer alone, you carried the world in your hand.
Google, Facebook, Twitter, etc., etc. have become a new space where we communicate, connect and congregate.

This baby is hard-wiring her brain to expect that space does not end with the four walls of her room.
To expect that time is not just, “Now,” but “All the time,” “Any time.”
Is this the baby who will regenerate our congregations?

What do you think are the chances that an iPad baby will disconnect from her world, and sit passively for an hour where every word she hears, sings and prays has been chosen ahead of time by someone else?

Here is our experience. Canada usually follows US trends. But I believe we are living your future.
But this chart also shows that this trend started decades before the internet. And that’s the second thing I want to talk about.

This map shows in green the world’s non-religious population.
In Vancouver where I live, 50% of adults report “None of the Above” as their religious background.
Blame it on what you will …

Christians behaving badly, secularism, consumerism, individualism, multiculturalism, the new atheists … .
For the first time in human history, the church in North America finds itself in a culture of “no religion, all religions, whatever!”

The church is encountering a perfect storm:
“Congregating” happens without a room, and without a fixed time.
Evangelization will have to speak to those who have no religion.

The era of the church building as the sole platform for ministry is ending.
Communities of faith must also connect, communicate, and congregate in cyberspace.
And they must connect with neighbours who view religion with suspicion, disbelief, or disinterest.

And the challenge is not just to become social media savvy.
How will we baptize her on Facebook?
Clothe the naked and feed the hungry on YouTube?
How will we show her that religious practices are life-giving?

Throughout my ministry, congregations have tried to respond to changes in society by making our room more inviting, warm, and welcoming.
But the room has left the building.
And the practice of religion is leaving the culture.

Let me conclude by paraphrasing Canadian poet, Patrick Lane.
The story of Jesus is our story now.
How do you want it to end?
That is a question that will get us working at the right problems.
Thank you.

Click here for an easy to print or email Adobe PDF version of this post, "The Room Has Left the Building."

Permission is granted for non-profit use of these materials provided credit is acknowledged as "David Ewart, www.davidewart.ca"