The Uniform Church? Not so much.

I believe one of the challenges facing our church is that while we may be United we are most definitely not Uniform.

We all know that each congregation and Pastoral Charge has its own unique history and context. But because we function as a national church, and only set policy nationally, it means that we expect all Pastoral Charges to be uniform in their ability to function.

This expectation in terms of statements of faith, worship practices, and social outreach encourages the lively conversation that makes us United.

But this expectation in terms of personnel policies – salaries, allowances and benefits; and organizational issues – board structures, leadership, etc. – can be a real burden and stumbling block for many congregations and PC’s because we are not Uniform.

But as the following chart shows, for almost every Year Book line, 1 Point Pastoral Charges have a greater share of our people and financial resources.

But this is just the tip of the ice berg, because when we look at the differences within 1 Point Pastoral Charges, we find that there is a large difference between those with the highest worship attendance and those with the lowest. 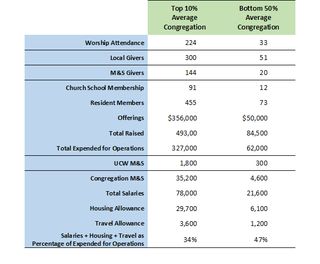 I would suggest that the situations congregations face are so varied that we need to significantly diversify our expectations, resources, and strategies. And this can NOT be coordinated nationally.

We are in a situation where the surrounding culture has changed so much – and in ways that are the antithesis of what we do – congregate – that no one can say for sure what is the correct response. Rather, what is needed, is the kind of flexible, local, contextualized support for experimentation. Including the experiment of being a traditional congregation.

Permission is granted for non-profit use of these materials.
Please acknowledge source as , "David Ewart, www.davidewart.ca, 2013."