Click here to download, print, or email an Adobe PDF copy of the complete 18 page report, United Church of Canada People Trends - 2009. Below is the first page of this report.

Note: After a good nights sleep and some second thoughts, I noticed and corrected a few typos. I also found an error in a formula, and went back and revised the 2008 functions so that they give a fairer comparison to the new 2009 data. All these changes have been incorporated into the document you can download as of Jan 13, 2011, 3:10PM PST.

The chart below gives the actual data for 2008 and 2009, and compares the actual results for 2009 with the forecast. 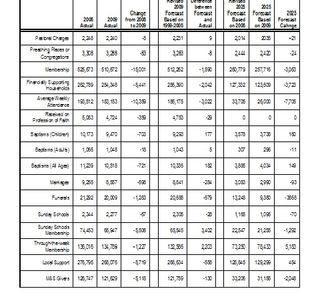 In all cases the data declined from 2008 to 2009, and the 2009 actual results were less than the forecast with the notable exceptions of: Pastoral Charges, Baptisms; Sunday School Membership; and Through-the-Week Membership.

Note: For 2009, the ten years of data were examined using the LINEST and LOGEST functions of Microsoft Excel. If LINEST returned the highest coefficient of determination, r2, then the straight line TREND function was used to project future values. If LOGEST returned the highest r2 value, then the exponential GROWTH function was used. In all cases the r2 values were higher than 0.96. And in all cases, the compared r2 values did not differ by more than 0.014. The r2 values are noted for each chart. (For the non-statisticians among us, r2 is a measure of “reliability.” It provides a measure of how well future outcomes are likely to be predicted. Generally speaking, if the r2 value is greater than 95 than the result is considered valid.)

As a result of this process, the GROWTH function was chosen for Pastoral Charges, Baptisms (Children, Adults, and Total), Marriages, and Sunday School Membership. This resulted in changing the previous 2025 forecast of Zero. And to provide a fairer comparison between 2008 and 2009, the forecasts from 2008 were revised using the same functions.

New for 2009 is the inclusion of data for Adult Baptisms, and Identifiable Givers for both Local Expenses and the M&S Fund. While the forecasted declines are serious for all items, the 74% decline for M&S Givers is especially notable.